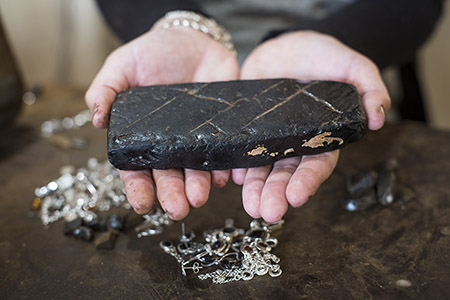 Whitby Jet is the name given to a black resinous material found in the cliffs around Whitby on the north eastern coast of England.

It has been formed as a result of fossilisation of wood from trees similar to the present day monkey puzzle tree which were growing in the area 180 million years ago during the Lower Jurassic Period of geological time. When the trees died, they fell into rivers and headed down stream to the sea where they became waterlogged and sunk to the seabed. Here they were covered in sediment and over time due to extreme pressure the cells of the wood were closed forming a dense compact material which today we call Jet.

Jet is known in some other regions of the world however none is of the same high quality as Whitby Jet. The most likely cause of this is the high quantities of North Sea Oil in the rocks around Whitby that has impregnated the Jet making it lustrous, durable and truly black. Whitby Jet takes a high polish when worked by hand and as a result has been a sought after commodity for the production of jewellery for the past 2000 years. 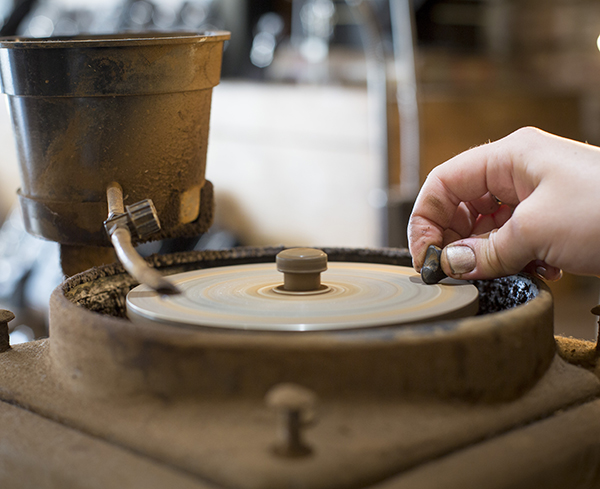 Whitby Jet jewellery has been found in Bronze Age burials and more commonly in graves from Roman and Viking times. A Jet works dating from the 2nd century was discovered under the site of the old railway station in York and is the earliest know site for the production of Whitby Jet jewellery. The Jet industry reached its peak in the 1860’s when it was decreed to be the official mourning wear in Victorian Britain. The last apprentice trained Jet worker died in 1952 taking most of the Victorian Jet workers skills with him as by now Jet was out of fashion and unfortunately many of these skills were lost forever. However, fashions change and time moves on and Whitby Jet is a most versatile material lending itself well to modern jewellery design.

Today a dozen or so craft people still work Whitby Jet, collecting it from the beach and polishing it by hand. When you own a piece of Whitby Jet jewellery you are entering in to a very old British tradition saved from the brink of extinction.